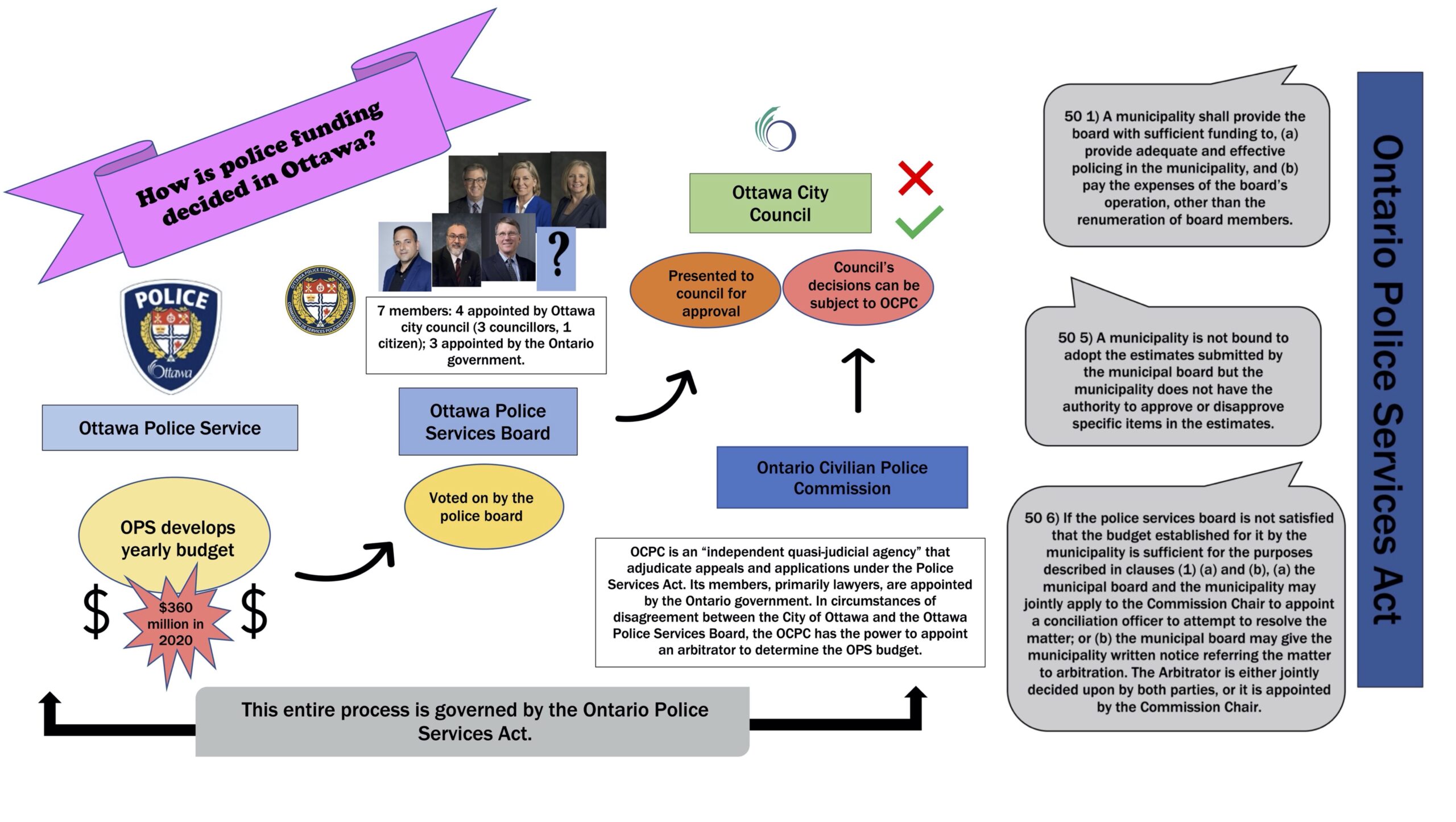 The decision-making process for how police budgets are established and approved differs between jurisdictions. Like us, you might have read the opinion piece by City Councillor Jeff Leiper which provides some helpful information about how police budgets are decided in Ottawa.* Leiper’s piece, and some of the comments by other progressive City Councillors, seem to suggest that because Council doesn’t control the Ottawa Police Services (it is not a City department), we should direct calls to defund the police toward other political work. Specifically, Leiper highlights the Community Safety Well Being Plan as something we should focus on.

Wanting to know more,we did some of our own research to map out how police funding in Ottawa works. We put together what we found into the infographic you can find below.

A yearly operations budget is first established by the Ottawa Police Services (OPS). It is then voted on by the Ottawa Police Services Board (OPSB) and then presented to City Council for approval. The OPSB has seven members, three of whom are city councillors (currently Mayor Jim Watson, Councillor Diane Deans, and Councillor Carol Anne Meehan), and four of whom are citizen representatives (one appointed by City Council and the remaining three appointed by the provincial government). You can find the full listing of board members here.

As Leiper points out in his article, while City Council ultimately approves or rejects the Ottawa Police Services budget, the Ontario Police Services Act stipulates that they cannot approve or reject individual items in the budget. In assessing the OPS budget, municipalities are required by the Ontario Police Services Act to provide the OPSB with “sufficient funding to, (a) provide adequate and effective policing in the municipality, and (b) pay the expenses of the board’s operation, other than the remuneration of board members.”

What constitutes “adequate and effective policing”? Good question! Who gets to decide what this looks like? Another great question! At the moment, it seems like the OPS gets to make those decisions and the OPSB and City Council fall in line.

If City Council rejects the OPS budget, the OPSB has a couple different options. The OPSB can direct OPS to present a revised budget, perhaps with guidance from City Council (formally or informally). If the OPSB decides that the municipality is unwilling to provide sufficient funding (as outlined above), they can request that the municipality jointly enter into a conciliation process, with the involvement of the Ontario Police Civilian Commission, or even request an arbitration process, whereby the OPS budget would be set by an arbitrator (either jointly decided upon by the municipality and the OPSB, or appointed by the Ontario Police Civilian Commission).

Just what is the Ontario Police Civilian Commission? It is an “independent quasi-judicial agency” that adjudicates appeals and applications under the Ontario Police Services Act. It currently has 12 members, appointed by the provincial government, all of whom are lawyers (or individuals holding law degrees). You can find the full list of appointees here.

What does all this mean?

We’re not experts, but here’s one important thing we notice in all this: despite the fact that there are various layers of decision-making to set the Ottawa Police Services budget, and despite the fact that city council has some limits on how it can make decisions about the budget, City Council still has the power to approve or reject the police budget. In other words, we, as residents, still have the power to force city council to prioritize funding other community supports and services that do a far better job improving our community than the cops.

* Many Ottawa residents have recently also received an email from Mayor Jim Watson outlining his opposition to calls to defund the OPS; it is clear that he is beginning to lay out how he will dismiss and undermine calls to defund the police. We offer this text and infographic to help clarify the technical and practical issues that would be involved in defunding OPS – the political issues are separate and deserve consideration too.